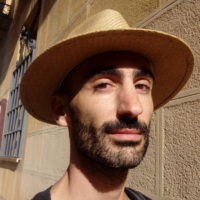 Darío Estrada Gómez-Acebo (Santander, 1983) has a degree in Translation and Interpreting from the University of Granada and has completed a Master’s Degree in Natural Language Processing and Multilingual Communication at the Autonomous University of Barcelona. In 2007 he began teaching Spanish as a foreign language in Barcelona, ​​and since 2009 he has been teaching in Greece, first in Corfu and later in Athens, where he works for the Instituto Cervantes. He has participated in the creation of materials for the teaching of Spanish, such as educational videos for a Greek audience and didactic units for high schools in the United States. He is also a translator of English and Greek.