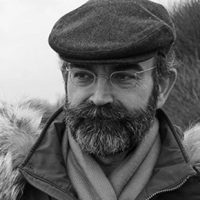 J. Á. González Sainz (Soria, 1956) is a writer and translator. He has a degree in Hispanic Philology and has been teaching Spanish as a foreign language for more than 30 years at several universities. His latest book is El viento en las hojas (Anagrama, 2014). Some of his most famous novels include Ojos que no ven (Anagrama, 2010) translated into English in 2015 (None So Blind, Hispabooks Publishing), Volver al mundo (Anagrama, 2003) and Un mundo exasperado (Anagrama, 1995). With Un mundo exasperado he received the XIII Premio Herralde de Novela (Barcelona, ​​1995). In 2006 he was awarded the XXV Premio de las Letras de Castilla y León (Valladolid, 2006); and in 2015 the VII Premio Observatorio D’Achtal de Literatura (Madrid, May 2015). He has also written a number of articles in well-known newspapers and journals (El País, El Mundo, ABC, Letra Internacional…), as well as short stories, among which it is worth mentioning those in the book Los Encuentros (Anagrama, 1989).

He has translated the works of several Italian writers and philosophers, in particular an important part of the work of Claudio Magris, and other authors such as D. Del Giudice, G. Ceronetti, E. Severino, G. Stuparich, S. D’Arzo…In addition, the journal El Trujamán, from the virtual center of the Instituto Cervantes, has some of his articles on translation.